Can you believe that my little pumpkin is almost 6 months!!! I am having such a hard time realising how fast he is growing. I try to enjoy every single moment with him, and not forget to cherish them!

During the holidays, I had (took) the time to read quite a few books. Some for my personal enjoyement, but some for my family as well. One of them was a book I had already read before:

which is IMO probably the most useful book explaining the Montessori philosophy for infants.

There are some parts of the book that I don't agree with. Breastfeeding notably, weaning, sleeping arangements for some part. But it is such a wealth of other information, that I was prepared to overlook those part and read the book again.

Again, it gave me so many ideas to enrich Pumpkin's environment. Many things I had already applyied, either because I remembred from the first time I read, or just because I had already did them with Peanut and was hapy with the results.

When we came back from the holidays, I was anxious to get back to work on modifying his environement and make it as friendly as possible for him.

So welcome to a tour of Pumpkin's room:

2 words I kept in my mind while creating this space: simplicity, and adapted. I wanted his room adapted for him, and keeping it simple just allows that.
So here is the (cute) view when you get in: The floor bed The first thing I needed to do was to install his floor bed. I couldn't sleep him in his basinette any longer, so it was getting dangerous. I knew that a floor bed was the next step.
I used a IKEA matress that I bought for my DD. THe mirror is just next to the bed. I was afraid that it would keep him from falling asleep, but au contraire! He falls asleep looking at himself most nights (while I am putting the other 2 to bed). The mirror is currently not hung on the wall, we need to fix something on it, and so that is why the pillows are on each side: to protect DS
ON the bed, there is a beige blanket. It is a double size organic coton blanket folded in 2. When I put DS to bed, I put him in between the 2 layers, much like if it was a sleeping bag. He LOVES to sleep on his tummy (yes I know…but at this point, whatever I’ll do, he will turn anyways!), so this allows him to have the freedom to turn and not be caught in the blankets. (the blanket is tuck under the matress on both sides)
Next , the changing station: A set of drawers with a dual purpose. With DD, the changing station was on the floor. However, having a back problem this time around, I had to have a changing station that was more back friendly

This dresser is IMO too big for the room. It is pretty useful now as I have to store the cloth diapers, and the middle section is dedicated to that. But once DS1′s wardrobe done (we have just moved recently), we will take the cabinet he is using right now, and move it to this room. The cabinet is a Ikea system that is very child friendly, and a lot smaller. But in the meantime, this will do.
I have added artwork near the chaging station for him to look at. The drawing are from the Wee gallery Next to his bed, between the bed and the door, there is a little shelving to store toys there are only a few toys there at a time: and right beside that is the potty station: We are ECing with this baby, and so having a potty in the room really makes things easier
I have also added on the floor a lambskin ( no pics sorry)
Since this room is supposed to be an office, it was made with ceramic tiling. Not really perfect for a little one. But with the floor bed, he has a nice place to play, and this addition on the floor makes another spot for him to enjoy while feeling another sensation on his skin.
I am currently working on some new artwork for his room, hopefully they will be ready next week. i’ll post about that later.
Finally MOBILES! Mobiles are a big thing in the infancy period. I have asked DH to fix a plant hook on the ceiling of the room. THis allows me to have a variety of mobiles, even ones that he can pull on like this: t is a mobile that I have found at Micheal Olaf. It is attached to an elastic, and so when he reaches for the hook, he is able to bring the mobile to his mouth. The elastic is not too elastic though, because otherwise he could get hurt when releasing the mobile. He LOVES this mobile, as it makes sounds when he graps it, so it is rewarding for him. having fun on the floorbed…
there are a few ressources out there about the environment of the infant. THese are the ones I used or got inspired from:
- Montessori from the start
-Albums from Montessori research and development
-And of course Finn’s room from Meg at Sew Liberated
Posted by Neptune at 06:18 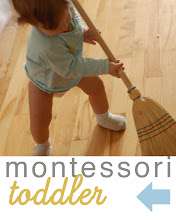